For as long as cycling has held me in its grasp, Bank Holiday weekends have always seen me trooping off to Wales, rain or shine. At first it started with road cycling, after one close encounter too many with an irate caravaner on the country lanes, I switched to mountain biking.

Between us, my friends and I helped wear a deep groove in the singletrack of Welsh trail centres up and down the country throughout the early to mid 2000’s. Eventually the novelty of following arrows on marker posts wore off. The rapid progression of mountain bike tech made once challenging trails feel dull (not to mention weight savings it brought to our wallets…) and soon we started looking outside the bike park for our next two wheeled fix.

It was obvious really, each time we passed a gap in the trees while bobbing around another commercial forest plantation, we’d spot the mountains in the distance. The vast openness and more importantly, the lack of crowds.

The closest either of us have which could be loosely described as a mountain bike.

Bikepacking became the new Bank Holiday Du Jour for our group. And over the passing years, our bikes became simpler rather than more complex. Suspension eschewed for rigid reliability and flat bars started to curl and drop for long distance comfort. The transition from mountain biker to gravel addict finally reached its finality when I started referring to tyre sizes in millimetres rather than inches.

For August Bank Holiday 2020, Nigel and I embarked upon the Bear Bones Welsh Ride Thing. Normally held in May, the impending chaos of Coronavirus had managed muddle up not just the dates, but also the organisation of this popular, yet low key bikepacking event. Instead of a mass start, this year entrants could start from wherever they liked, so long as they called in on Event HQ at some point to ‘sign on’.

Welsh Ride Thing rules are simple; the organiser shares a number of grid references in advance of the big day. Riders can then plan their route through the depths of Mid-Wales to ride to as many of these checkpoints as they wish. There’s no prize for completing all or even none of the checkpoints, it’s just a great excuse to get you out on your bike and do a little exploring.

As we were doing the event on our gravel bikes, our route planning concentrated firmly on following narrow country lanes, forestry access roads and the ancient drovers routes which meander over the Cambrian Mountains. An area of the country known as the Wilderness or, Desert of Wales. Not because of a huge expanse of sand and camels, but rather the region is desolate and isolated.

The locality we were now traversing is one of the most untamed and desolate in either division of the Principality; it has indeed with perfect truth been called the “great desert of Wales.” Vast sweeping ranges of hills with round tops, add to the dreary aspect of this nearly unpeopled region…

160 years on, very little has changed. Without mobile signal, even my phone was questioning whether we had indeed travelled back to the 19th century. With our modern life firmly attached to digital communication, its absence was welcomed. And with a lung busting climb straight up from our starting point, communication between myself and my ride buddy was limited to a few breathless grunts of acknowledgement that this wasn’t the gentle warm up we’d hoped for.

Soon we were deep into the green desert and the famous wilderness was clear to see. No sign of buildings, no roads, not even the distant buzz of traffic on tarmac. Other than the bleating of sheep and the occasional cry of a red kite swooping high above, the only sound was the crunching of gravel under tyre.

In these uncertain times, it’s prudent to be self-sufficient on our rides as you really can’t rely on places to be open like they used to be. Riding in the Cambrians this rule is only more important, because resupply points (even before the pandemic) are so few and far between! Although we were travelling light compared to the riders of GBDURO, we were carrying far more equipment than what we’d normally take on a weekend camping trip.

A fully loaded bike can reach some impressive speeds on the gravel descents but can feel like you’re going backwards when the trail starts to point up! One thing Wales always has in abundance is water. And by carrying water filters in our kit, going thirsty was never going to be a concern. It also meant that we could at least lighten our bikes a little by running our water supplies relatively low.

There were points on the ride where choosing to ride gravel bikes may have been a little optimistic. This couldn’t have been more apparent than when I followed the route displayed on my GPS around a corner and onto what looked like a suspiciously well-groomed trail to be deep in the middle of nowhere. As the trail dipped ever downwards, my speed increased, the drop-offs became larger and a red flash of a trail marker whizzed past my periphery. We’d inadvertently picked up the MTB trails at Nant-y-Arran! High fives were exchanged for reaching the end of the trail unscathed and as luck would have it, the trail centre café was open for a socially distanced sausage roll and coffee. Suitably recharged, we headed back into the wilderness to tick off a few more of those Bear Bones checkpoints.

After a long day of lugging laden bikes up rocky trails, descending at breakneck speed and then clambering up again, our legs were starting to feel weary. With the light starting to fade, thoughts turned from admiring the remains of crumbling lead mine buildings and on to finding somewhere suitable to set up camp for the evening.

The many river crossings proved useful for washing sheep poo off shoes!

Aside from our lunch stop at Nant-y-Arran, we’d not seen another person since the start of our trip. Ironic that as soon as we wanted somewhere quiet for the night, ideally with a scenic view over a reservoir, the wilderness was now teaming with people. With smoke wafting up a from a cacophony of BBQs along the waterfront, we headed for the hills. The rocky path was hard going but guaranteed the car campers wouldn’t be following us up.

Finding a decent camp spot in the dark is never easy. Even with 4,000 lumens of bike light at your disposal, you never get a good impression of the location. We finally called it a night and pitched up in a forest overlooking the gravel track which brought us up to our quiet camp spot. A delicious moon lit supper for two was enjoyed while midges serenaded us with their constant buzzing. While our meal was finished, they were just getting ready for the main course: Sleepy Bikepackpacker… Tasty.

With light fading fast, it was time to find a suitable camp

Our slumber was rudely awakened in the early hours as the whole forest lit up like day and the sound of thunder reverberated through the dense pine forest. Had we trespassed into a dragons lair? Worse than that, our camp was inches away from a twisting trail of singletrack which descended down to the fireroad below. A squad of motocross riders were tearing through the forest on a night ride. It was hard to tell who was more surprised. Us or them!

Attempting sleep after the commotion was pointless and at first light, we striked camp. Riding some of the best gravel trails we’d found all weekend, with the sun slowly rising above the hills, the images conjured up the epitome of adventure. And as the route started to head towards the coast, our primo gravel road suddenly turned up to 11 on the radness scale as it pointed down. Long, sweeping switchback descents followed one after the other as we plummeted down from the hills and into the green valley below.

Rise and shine! Time to pack up and search for breakfast…

Our destination steadily appeared on the screen of our GPS units. The Bear Bones HQ. The original objective of our weekend had been somewhat forgotten. Thanks to the giggle-a-minute riding, we’d often dismissed the checkpoints in favour of continuing our attempts to break speed records on the gravel descents.  Luckily, Bear Bones is not one to judge and pointed us in the direction of a cake laden table with the words every cyclist doesn’t need to hear twice: “help yourself.”

Our cake induced stupor resulted in an even steadier pace as we wearily wobbled our way up the last few lanes back to the van which would signify our journeys end. The conclusion was that neither of us had pushed our limits, technically or of distance. We hadn’t even completed half of what we set out to achieve and yet, we’d had the best couple of days all year. Filled with belly laughs and new, lasting memories. Cycling lifts the spirits and Wales? Wales never fails. 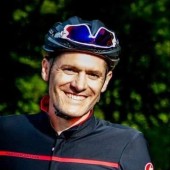 XC racer turned gravel junkie. James has written about his enthusiasm for gravel since 2015 for various media outlets. He works in the cycling events industry, devising new ways for people enjoy themselves without realising their suffering.