In case you weren’t aware Merida are HUGE with R&D and production facilities in Germany, Taiwan and China. As one of the biggest companies in Taiwan (cycling or otherwise) they produce over 2 million bikes each year. As well as their own designs Merida are entrusted by a whole host of brands to make their bikes for them. With this much clout and expertise I had great expectations for the Silex. Arriving as it did during lockdown, the Silex came direct from the warehouse rather than via a test fleet. I was pleasantly surprised by just how little work needed to be done to the factory fresh Silex to make it trail ready. I’m sure this makes the brands stockists even happier! For 2021 the Silex range features 9 models, 5 with alloy frames and 4 made from carbon.

With alloy frames the norm, oversize rarely gets a look in anymore when describing frame tubes. The Merida however is made from a properly beefy triple-butted tubeset. The heavily manipulated and hydro-formed tubes could easily be mistaken for carbon. It’s not until you clock the welds you realise the Silex is metal. The welds themselves are neat without having been smoothed or filled. A quick glance at the Silex and you can see the geometry is geared for a more comfortable position rather than outright speed. Compared to an equivalent sized Salsa Warbird the Silex runs a shorter fork but still has a whooping 40mm extra in stack height.The 220mm headtube taking the lion’s share of responsibility. In fact it’s closer to the 29er Cutthroat! Merida haven’t been caught napping and the Silex features all the mounts that are now considered the norm. Namely 3 bottle cage mounts on the frame, 2 on the forks and very well hidden rack and fender mounts. It’s a shame however that they haven’t spec’d any triple-pack bosses for the use of anything-style cages.

Fans of twangy seatposts might be dismayed to see a 30.9mm seatpost fitted but this will be welcomed by the increasing number of riders using dropper posts. The decision to use a PF86 might also raise eyebrows but we didn’t experience any creaks, although the test period was uncommonly dry! We’ve also come to expect thru-axles as the norm and the Silex doesn’t disappoint. Both front and rear axles are held in with sturdy 6mm hex bolts that once torqued up stayed put with no issues. Initially I was irked by the rear hub having a lever and front being a plain hex until I realised the lever could be removed to use on either axle!

Flat mount brakes and internal cable routing make for an uncluttered and sleek design. There were no rattles from the internal cable runs so Merida have really done their homework. The underside of the BB shell reveals a smart exit port for the cables. As far as maintenance goes this shouldn’t cause any undue headaches.

Mud clearances were good both fore and aft with the factory fit 700 x 38c tyres. While the relatively narrow wheel/tyre combo meant plenty of space, they seem a little undersized when 40c seems the norm and 45c not uncommon.

Our 2020 model was a sparkly deep red. For 2021 the Silex 600 is available in either gloss black or gloss fog green. While Merida’s pro-road range isn’t shy of advertising the brand, the Silex is a much more subtle affair. With only a handful of discrete decals the Silex will keep the casual onlooker guessing as to who made it.

Merida have turned to 1x pioneers SRAM for the stop n’ go parts on the Silex. Apex might be bringing up the rear in the SRAM hierarchy but in fairness SRAM don’t really go in for budget road groupo’s! The 40t chainring paired with a an 11-42 gives a touch lower gearing the 1 to 1 you would expect from a typical compact road set up. The combo of 1x specific chainring and clutch mech gave us secure reliable shifts over the roughest terrain. A bonus is the decision to opt for the HRD hydraulic brakes and centerline rotors. These took very little bedding in and remained squesk free throughout the test.

Up front the tall stack and subtly flared bars make for a comfy cruising position. The dense grippy tape helps keep you in the drops longer and you can easily sit-out long draggy climbs on the flat tops. Alongside the bars the remainder of the finishing kit is also solid, if unremarkable, own brand Comp-CC or Expert kit. By and large it functions well without drawing attention to itself.  Saddles are obviously a personal thing but the Merida perch proved comfy enough as a middle of the road option and unless you’re particularly delicate you’ll get by on all but the longest rides.

As with the finishing kit the wheelset doesn’t leap out at you but gets on with the job without fuss. At 19mm wide and 24mm deep the Expert Cx rims are a touch narrow by modern standards. This combined with the 38c tyres means the frame, fork and bars will have a bigger role to play in comfort compared to rivals. The tyres are good quality rubber however, Maxxis Ramblers in high spec folding, tubeless ready and EXO reinforced casings. The densely packed tread, made from nice sticky rubber, gripped well on the dirt but didn’t drag on the black stuff. While the rims aren’t labelled as such, with these tyres, sealant and valves you should be able to set the Silex up tubeless with little bother.

On the tracks & trails

With its high front end the Silex naturally lends itself to longer paced rides versus smash n’ grab blasts. Despite the relatively skinny tyres and beefy alloy frame the Merida doesn’t ride harshly. The tapered carbon fork is compliant without being vague and the rear feels energy efficient without battering the rider.

The test period for the Merida coincided with probably the longest stretch without rain I can remember. Long days were spent aboard it kicking up dust in the heat haze. The Silex saw a good few road miles at a pace but that’s not really its forte. If however your idea of gravel riding includes events like the Dirty Reiver or Frontier 300, or you fancy racking up some long days bikepacking, then the Silex wouldn’t be a bad shout. The alloy construction could well appeal to those who are carbon-phobic and you aren’t paying much of penalty in the weight or comfort stakes for that piece of mind. At £1600 the Silex 600 doesn’t scream value but instead adds up to more than the sum of its parts. It’s a no-fuss machine that you could happily jump on and ride off into the sunset. 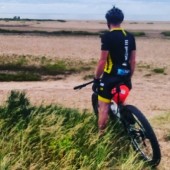